Yep, Cindy was adopted at the last minute yesterday by a wonderful couple. She's going to be very happy, I'm sure. These were two gentlemen that I was hoping would adopt Senorita last weekend, so they'd already had my "seal of approval". When they picked Cindy, I couldn't have been happier. Woohoo!

I brought home Thirrin in her place, and we'll be keeping her throughout the entire month of October. Animal Allies doesn't take the black cats to the adoption fairs in the month of October because...well...because people are idiots. Strange and cruel things can happen to any cat near Halloween, but black cats seem to be particularly at risk. Thus, Thirrin will be staying with us all month.

And through the art of creative compromise...we'll be taking on two five-month-old kittens as well - Zoe and Emily. They currently live with a wonderful foster mom, but she's afraid they aren't getting the socialization that they need because she lives alone and works out of the home. Here, they'll get lots of attention and hopefully be more prepared to deal with all of the action at the adoption fairs, and ultimately, be more prepared to enjoy a loving family when they get adopted.

Note that I said that was through creative compromise. I wanted to take the cats. Tai had originally said he wanted no more than one foster cat at a time. So how did we come to this agreement? He wanted fire poi! He went to 'Lissa's last weekend and spun fire for the first time. He got a rush out of it, and he wants to keep doing it. But see, I hate fire! I'm terrified of it. So he agreed to take on the other two cats, plus keep Thirrin for the month of October, if he could order fire poi. Strange, but we both feel like we got the better end of the bargain. LOL Here are a couple of pictures of him spinning for the first time: 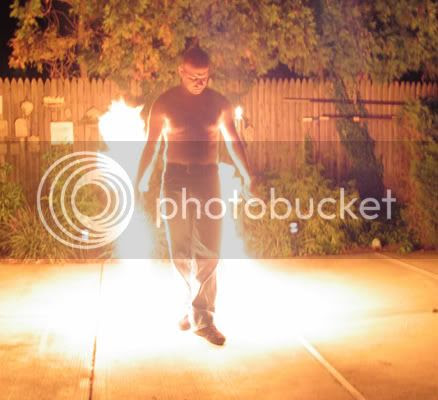 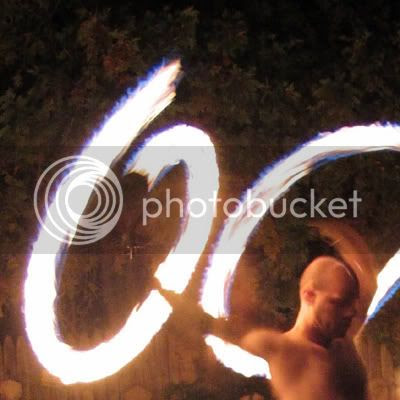 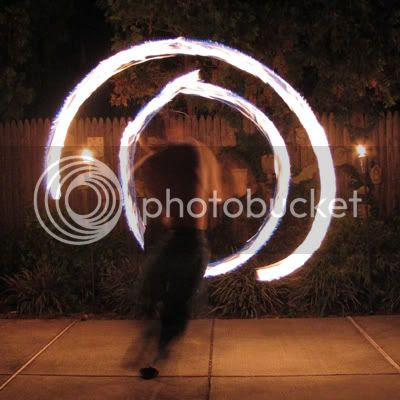