I'm still here. This management class is kicking my ass. I have both an individual paper and a group assignment due every week. I don't know if I'm coming or going, usually.

My schedule at work has eased up a little bit and gotten regular. I'm working strictly Tuesday-Saturday. Tues is a 4 hour shift, Wed-Fri are regular 8 hour shifts, and Sat is a 12 hour shift. It gets me my 40 hours without driving me too insane. I do like that my first day back after my weekend is only 4 hours. That's handy. And I don't mind having a 12 hour shift on the weekends, as it gives us more time to accomplish stuff.

So, in other news...Darcy has been complaining about her eyes hurting, so I took her for an eye exam. Turns out, she needs glasses! It's an itsy-bitsy teeny-weeny prescription, but she needs them. She looks absolutely adorable in them, too. 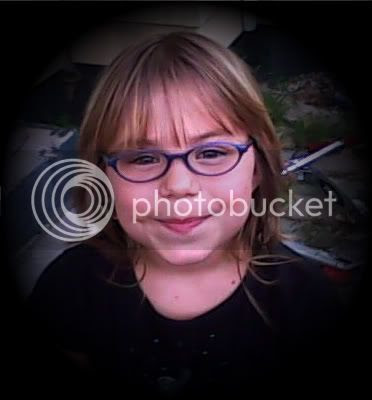 And holy cow, how did I get lucky enough to get a kid who looks good in THE CHEAPEST FRAMES AVAILABLE? The more expensive ones looked silly. Amazing. I got her a second pair, but they won't be in for quite a while. They're kind of a magenta/burgundy color and look fabulous, too. What I don't like about either pair is that they make her look older. That's SO NOT FAIR!

I had Perrin's eyes checked at the same time. His prescription has actually gone DOWN a little bit. He was a +3 in one eye and +2.75 in the other. Now both eyes are +2.75. We got him three pairs. Two of which are exactly the frames as he had last time because he looks so good in them. The other is going to take a while, too, but it's similar to his old ones, just gold. He gets three pairs because he breaks his glasses A LOT.

Not shabby at all, considering lenses alone here are about $45 a pair.

Where do you get your glasses? Ours are all covered for one year, so Em usually only gets one pair. We keep the old pair as an emergency back up, but this time around I'm considering having the lenses replaced with the new prescription in her oldest pair of glasses. So she'll have the new script, the old pair with the old script, and the really old pair with the new script. (We opted to put the new script in the oldest frames so there wasn't so much "prescription gap" in the back up pairs. Does that make sense?)

I go later this month to get my eyes examined again. I know I need a new script, and probably bifocals....at 39. Bleugh.

Wow! Great deal! I spent more than that on my son's glasses of course he has a bad prescription so we have to get the extra light/thin lens and bifocals and I always get him transitions in one pair. You can’t be too careful about UV rays even at his age.

Tell Darcy she looks so grown up and very pretty in her new glasses.

I just got home from my son's eye appointment his glasses cost $370.22. I even had a dicount that added up to nearly $100. Of course my kid is now too big for the little kids glasses and I had to get small men's frames and there were few choices. *sigh* But on the up side his eyes are impoving.

Wow, she is adorable! Great choice of frames. In that picture you can catch a glimpse of what she might look like in about ten years or so, all grown up...